I have finally jumped onto the IoT bandwagon, so this is a better-late-than-never kinda post.

IoT – the Internet of Things, is a revolution of sorts. IoT devices promise to connect all devices to the internet. Check out any of today’s consumer electronic devices – thermometers, humidity sensors, power meters, which traditionally lend themselves well to such ‘internet-linking’, as well as non-conventional devices – toasters that tweet when your toast is done, refrigerators that Whatsapp you when you’re low on milk, and potties that change your FB status to:

(There’s a strong debate that the poo emoji is actually an ice cream, but I digress). Here’s an interesting article to what 2016 has in store for us (and if you’re reading this in 2020 for some reason, don’t snigger at old tech!).

IoT devices have been around for quite a while now, however only last year, with the ‘discovery’ of the ESP8266, did they become cheap and accessible to everyone. How cheap and how accessible? To quote Brian Jepson from Make - “This is inexpensive enough to be very much in the territory of ‘thousands of sensors-launched-out-of-a-cannon’-cheap.”

The ESP8266 is an amazing device. Made by Espressif Systems, the chip is a super-cheap WiFi device, that can be configured as a host (ie Access Point), or a client. Although the ESP8266 itself comes in an evil 0.5mm-pitch QFN with no on-chip flash memory, you can find complete modules with external SPI flash memory, status LEDs, pins broken out, selling for under USD5 at the time of writing (Dec 2015). Infact a bare-bones ready-to-start module can be had for Rs.270 (USD4) in India.

When I got back home for the vacations, I decided to give myself an early Christmas gift, and picked up an ESP-01 module, and an ESP12F module, along with a few other things. 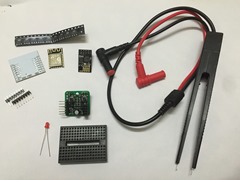 Everything in the picture was bought from Inkocean (other than the mini solderless breadboard, the adapter board in the middle, and the LED).

The white adapter board breaks out the pins of the ESP12F module into a convenient breadboard-compatible pitch. The ESP-01 module is not really solderless breadboard compatible due to its dual-row pin header. To use this module, I had to build an adapter board, which you see in the middle of the picture.

Getting Started – AT Commands

Out of the box, the ESP-01 responds to AT modem commands sent over 3.3v UART TTL signals. The AT commands allow you to talk to the chip, view WiFi networks, connect to a network, and do several other things.

Connecting to a network was pretty easy, and I was able to ping the module from my laptop’s command prompt in a matter of minutes.

With its AT command set, the ESP-01 plays nice with almost any microcontroller capable of reading and sending serial strings. However, IMHO, its real power lies in the fact that it can be re-programmed using nodeMCU (Lua scripting), or the Arduino IDE (Processing), or even a BASIC interpreter. Since I am already familiar with the Arduino environment, I chose to experiment using this.

The ESP8266 can be put into various modes by setting combinations of I/O pins high or low, thus allowing it to boot from SPI flash memory (normal), or go into bootloader mode to update firmware (via UART Rx/Tx), or boot from an SD card.

To use the 8266 with Arduino code, we obviously need to put it into bootloader mode. This is done by momentarily pulling GPIO0 to ground while resetting the chip (pull RST to ground or cycle power). Doing this multiple times with dangly bits of wire would be tedious, so I made a simple adapter board with appropriate connections: 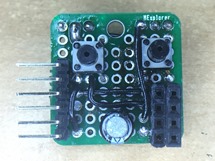 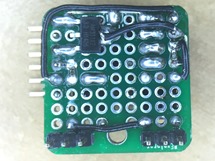 Left: top of the adapter board, and Right: bottom of the board. All pins of the vertical header are not connected; only GPIO2 and Gnd are connected at the moment. I plan to breakout GPIO0, GPIO1 (Tx), GPIO3 (Rx), and 3.3v later

I had a few problems getting the adapter board to work (details in the next section), but once I got it running, I threw the standard hello-world/blinky test code onto the 8266 using the following Arduino code:

And when this worked flawlessly, I tried a webserver demo:

Left: the serial terminal provides a handy debug
Right: the landing page of the webserver 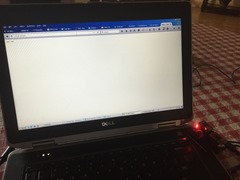 Turning the LED ON and OFF

I shouldn’t really call it a ‘problem’, but for lack of a better word, that’s what it is – the ESP-01 module has got 0.1in-spaced dual-row pin headers. This is not convenient for solderless breadboard prototyping. There are a few hacks/mods available online, but I decided to go the adapter board way.

The adapter board was not to difficult to make, and I faced no real problems while soldering. The board was a dual-sided proto-board, which made things a little easier. The LM1117 was soldered on the bottom side, as were the tiny 0201 resistors, scrounged from my junk box.

I had initially gone with a 10k pullup on the RST pin of the ESP-01, and a 10k-22k voltage divider on the FTDI’s Tx line. The choice of resistors for the voltage divider was the cause of a lot of grief. I was able to see all the debug messages coming from the ESP-01 (since the ESP’s Tx was directly connected to the FTDI’s Rx), but for some reason, no messages were being received by the ESP-01. I changed baud rates, checked and re-checked my circuit, measured voltages, tried a loop-back test with just the adapter board, all of which worked fine; it was just that the module would not respond when queried with an AT command. And since the loop-back test worked, the signal path along with the divider resistors was obviously good.

I had almost concluded that I either had a dud chip, or corrupted firmware, or a chip with a damaged Rx pin, and was about the go down the rabbit’s hole and break out my oscilloscope. Something made me change the divider resistors by an order of magnitude – I swapped the resistors to 1k-2.2k. Maybe the 8266 liked a stiffer drive? This was a bit surprising since the datasheet states that an 8266 input needed just 5nA drive current; the 10k-22k combo was capable of sourcing significantly more than that! I dunnno.

Once I changed the resistors everything worked fine. The chip happily responded to AT queries, and re-programming with Arduino IDE-compiled code was not a problem.

A deeper look into the datasheet showed that I/O pins of the 8266 are internally clamped to 6v. So technically, I could use a single series resistor on the FTDI Tx/8266 Rx and overdrive the Rx pin. The protection diode would do its work and clamp the voltage on the pin to 5.8v. However, I wanted to do things the ‘right’ way.

Apparently, ESP-01s from different manufacturers have different baud rates. Mine defaulted to 115200 for comms, and 76800 for debug. YMMV.

Obviously, there’s much more you can do with this chip than just turning on and off an LED. The ESP-01 makes available at most 4 GPIOs – GPIO0, GPIO1 (Tx), GPIO2, GPIO3 (Rx) – with caveats.

During development, GPIO1 and GPIO3 may be reserved for UART functions. Connecting external hardware to these pins may interfere with the UART signal levels. You could easily wire up a port expander like the MCP23008/MCP23017 or a serial shift register like the 74HC595.

The ESP12F module breaks out all the pins into an easy breadboard pitch, and if you really want all pins for your custom board, QFN DIY soldering isn’t all that tough.

Another getting started guide:
http://www.madebymarket.com/blog/dev/getting-started-with-esp8266.html